I was very young when the original Mandal commission and reservations in education came about. My first exposure to it was actually in the men’s room. A line was drawn with the following words scribbled next to it ‘If you want to join the fire department, pee over this line’. Someone then had another line drawn half way down and scribbled ‘For Scheduled Caste/Scheduled Tribes‘.

On growing up and better understanding reservations in education, it started making more sense and you see the need to uplift sections of society which never had oppurtunities before. The former American President’s, while introducing affirmative action, said “You do not take a person who, for years, has been hobbled by chains and liberate him, bring him up to the starting line in a race and then say, you are free to compete with all the others, and still justly believe that you have been completely fair.”

The current ruling Congress party brought the reservation issue back to the forefront with a proposal of increasing the reservation quota and including Other Backward Casts along with SC/ST. The Congress party has a history of playing caste politics to preserve its vote bank, inspite of knowing that the number of OBC’s have doubled in the last decade since the mandal commission. The whole pretext of helping underpriveledged classes is no longer true as the poorest and most downtrodden have been passed over. With their narrow minded approach towards OBC reservation, they seem to ignore the other non Hindu religions in India. Muslims have one of the lowest literacy levels in India, so why shouldn’t they avail of reservations as well, not to mention Sikhs, Christians, Buddhists, Jains, Parsis and all others. The government instead wastes money pouring it down the drain, funding the flailing public schools while every minister’s child attend the better known private schools. 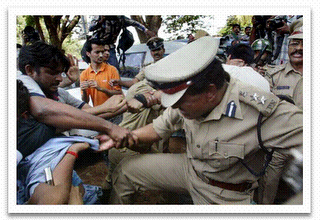 The government apathy lead to widespread protests amongst the student community. Quite a few of the students resorted to hunger strikes in an effort to have themselves heard.

The government, in a desperate attempt to save face, tried to use police force to break up the protests. Somewhere along the line to keep their caste based vote bank, they seem to have forgotten that the protestors were medical and engineering students.

The fire of protests have started, will be interesting to see what the government’s next move will be.

With a touch of dramatism, here’s words from the movie rang de basanti

Nagaland, a christian dominated state in North East India, has taken the next step in the “fight” against the book Da Vinci code.

The book has been banned in the state even though the book is readily available in the rest of India. The education minister announced the decision calling the book blasphemous and it being an affront on the Christian faith.

Publishing, selling or even reading of the book is now banned henceforth in the state.

I wonder if Leonardo Da Vinci would have ever thought that three centuries his name would give rise to so much contention. The movie Da Vinci code is being released today to much fanfare, brickbats and hunger strike threats.

There is enough said and done about the theme of the book and there’s nothing I can add to the debate. I’m just amazed at how relatively trouble free the movie release has been in the western (christian) world while it has lead to all sorts of problems in Asia. Phillipines has outrightly banned the movie while India (which has 2% christians) have finally cleared the movie (after special screenings for all concerned) with additional disclaimers to be added to the beginning and end of the movie.

Indians have always protested against something or the other. We may not get anything done, but we do know how to organize a protest and not get things done. Contentious issues like Satanic Verses and the Muslim prophet muhammed cartoon fiascos have had their origins in India.

Irrespective of the religions, all Indians like to believe that if something offends them, it is not worth displaying to others. There are many incidences where protesting groups ransacked precious libraries on issues like unflattering book on Shivaji (Maratha ruler in the 17th century) or political groups like the Shiv Sena showing their might by ransacking and pillaging theatres showing movies not to their liking or taste.

The Christian group, Catholic Secular Forum, having neither political or mass backing cannot physically have the movie removed from theatres. So their secretary Joseph Dias resorted to hunger strike resulting on the current restriction on the movie. Indians like a good protest irrespective of the severity of the issue and the current government (the same one which banned satanic verses) had to make the concession on the grounds of secularism and religious freedom.

Major issues are constantly hijacked on religious grounds, but its very rare for people in power in India to stand up on principle. Sony pictures currently are fighting the disclaimers, so it will be interesting to see if the Indian government does take a stand without bowing to religious fundamentalism.

The US Government finally released the pentagon video to counter conspiracy theorists. The plan shows a plane hitting the pentagon (not too conclusively unfortunately since its a security cam and doesnt have decent fps).

This bit of evidence does give a bit more credibility to the government and I’m glad they are taking some of the conspiracy theories more credibly. Maybe the Sheraton hotel cameras, gas station and the virginia Department of Transportation camera prints will be conclusive evidence of the plan attack.

But for now to the credit of the government they have stepped up with some evidence.

For every major event in history there have always been a group which believe that there is a conspiracy behind it. There have been numerous theories from Neil Armstrong didn’t actually land on the moon to the CIA being behind John F Kennedy’s death.

It’s easy to discard most of it offhand, but after watching a couple of documentaries on the attacks in the United States on Sept 11, I am inclined to believe in that the normal understanding of the attacks may be flawed.

Now 9/11 is an emotional topic for most americans and others (including Indians which were the second largest group in the casuality list) and this post isn’t meant to offend anyone. There are a few questions raised which appeal to my logical sense and I believe they need to be answered for it be a balanced discussion.

I’d like to live on the sanskrit principle ‘satyam eva jayate’ or truth always prevails – not trying to be too preachy :).

People who haven’t watched the loose change video, would be encouraged to atleast try to watch the video before dismissing their observations.

* WTC towers are the first couple of buildings in the history of sky rises to fall due to fire. These include building which have been burning for quite a few hours as well as the empire state building which survived a b-52 bomber which crashed into the building. World trade center 7 was the only building to collapse even though there wasn’t any direct hit on it.
Quite a few of the survivors of the WTC towers mention secondary explosions in the buildings which go along with video footage and the recently releases fire fighters audio conversations with control suggesting multiple secondary explosion almost like implosions carried out in controlled demolitions.

* Multiple first hand observer accounts suggest that a airplane which did not have side windows hit the WTC towers. This would negate any commercial jetliner which are believed to have hit the WTC.

* The pentagon was hit by a low flying airplane which did not leave any skid marks on the grass. Also the only damage on the pentagon is a 16 foot hole with no damange caused by the 42 foot wingspan of a boeing or by the titanium alloy engines. There are no fuselage or other wreckages of the airplane at the pentagon with the official explanation being that everything evaporated due to the intense blaze of the crash.
This seems to be quite unlike any other aircraft accidents.

There was a neighbourhood gas station, a nearby sheraton hotel and the virginia DOT which had cameras which could have captured the crash. These videos were confiscated by the FBI. If this is true, the government can release these videos and silence any conspiracy theorists.

These and other observations (with print and media references) would raise questions in any reasonable logical mind, IMHO.

The Horn of Africa has one of the worst droughts in the past decade leaving millions on the brink of death.

Africa has half of the world’s HIV/AIDS population with some countries testing 40% and rising of their population.

Dictators like President Mugabe of Zimbabwe terrorize their country with police brutality and repression.

The dark continent has always been exploited by the western world for its natural resources. Africa, once we are done raping you, the blood diamonds run out, or our susidies on items like American cotton bankrupt your farmers, will you still be able to stand up and have hope for the future.

Eddy Grant wrote this song during the apartheid regime in South Africa. It’s been a while since I’ve heard this song, but if there is any song for africa this is the one which comes to mind

Well Joanna she runs a country
She runs in Durban and the Transvaal
She makes a few of her people happy
She don’t care about the rest at all.

Even the preacher who works for Jesus
The archbishop who’s a peaceful man
Together say that the freedom fighters
Will overcome the very strong.

Today, I witnessed the biggest rally ever held in chicago where over 400,000 people marched against the new proposed immigration bill which proposed deportation of the millions of undocumented aliens. I have been trying not to take a stand on this thorny issue for a while now, but luckily I dont really have to please my political constituency.

One of the basic demands of the rally was to provide amnesty for all. If this is accepted, it will put all laws passed in this land to be invalid. An amnesty would also set a wrong example for all the people who are trying to take the longer route and legally gain citizenship.

The immigration bill to deport the over 11 million undocumented workers is also plain silly. America does not have the resource to manage to complete the task, to man the borders to stop further illegal nor is the economy strong enough to sustain the loss of low paid workers. Deporting people and breaking up families is against any humanitarian values and concerns as well.

John Kenneth Galbraith, who recently passed away, summed up socities as, ‘Under capitalism man exploits man, under communism its the other way around’